Apparently all it takes for me to get back on here (after a 4 month break!!!) is a 103 degree temperature, body aches from the roots of my hair down to my pinky toes and being tagged on Facebook as a Eugene Marathon Race Ambassador.

First things first, this awesome illness... I'm sick.  I'm the kind of sick that has me texting Heather, my running partner, at 4am so that she doesn't show up at my house at 6am for our scheduled run.  I've never done that before.  I have never, bailed on a planned run because I wasn't feeling tip top. Dan was just telling me that he knows I'm sicker than I've been in a long while because of skipping the run.  It's true, I'm usually one to have the belief that most illness feel better with a run.  This, unfortunately is not one of those times.  I would like to give thanks to my youngest three children for passing along their lovely germs to me.  Hooray.

Anyway, I'm sure I'll survive.  Hopefully I'll spend most of today in bed and recover enough to get to class tomorrow and be ready to run again Friday (Thursday is my rest day and I think I'll keep it). Soooo, let's talk a bit about the Eugene Marathon.

Eugene is probably one of the most amazing places to run.  Almost everyone that lives here does it at least on occasion.  Even those that abhor running have secretly contemplated giving it a shot.  When Dan and I moved here in late 2001, I dabbled in running.  I had been a runner in elementary school and jr. high and high school and even a little bit at one of the colleges I attended...but I never really put my heart into it.  After a few moves, Dan and I ended up in a South Eugene home where we about half way between Hayward Field and the Amazon Trail and right on the Eugene Marathon Course and there was no looking back...try to not be inspired when you constantly have elite athletes running past your living room window.  Now, I can't imagine my life without running in it.

As for marathons, I don't have the best track record with them.  I think that it's just not my distance.  I struggle.  After my last marathon in 2014 (which apparently I never blogged about) I decided I needed a long, if not permanent break from road running...specifically, road marathon running.  I've done a pretty good job too...in 2015, I only ran two road races, a 10K with Emme and a 5K just for fun...not a single marathon.  I wasn't even tempted to sign up for a marathon...until my brother came home for Thanksgiving and started talking marathons to which I told him that if he only ever runs one marathon in his life it has to be Eugene!  And, not wanting to be left out of the fun, I of course signed up to run it with him.  Then I applied to be an ambassador and here we are...me talking about one of the greatest marathons ever.  I do love the Eugene marathon.  It's a well put on event and it covers most of my favorite road places to run in Eugene.  This year is the 10th anniversary and it will be my third time running it.  The first two goes at Eugene, didn't turn out quite as I had hoped they would 2011 and 2013...hopefully, the third time's a charm.

I can't make any real promises, but I hope to get on here a bit more often (not just when I'm sick) to stay updated on my training for American River 50 in April and of course the Eugene Marathon in May.  I also have a couple of awesome products to review and even a giveaway or two.  Yay!

And because every post needs a picture, here is the gate to beautiful and historic Hayward Field, the start and almost finish (you get to finish on the track itself) of the Eugene Marathon. 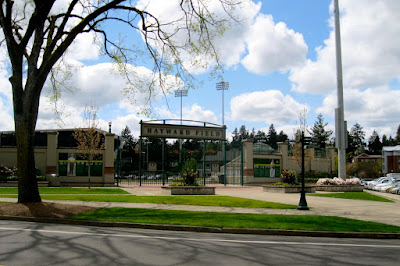 Eugene couldn't ask for a better ambassador than you! You know that course inside and out. And you've probably logged more miles on the course than most people ever will. Hope you are feeling better. The streets of Eugene missed you this morning.

Sorry you're sick, but when you're taking classes at LCC and with 4 of your kids in school do you not realize that you're going to catch every bug that goes through Oregon? Glad Donald was able to convince you to run Eugene this year....maybe Boston is in your future!